I found a perfect match to the Colt Combat Elite I had. This was one of the first runs of the C.E. in the mid 80's. The one I had was a graduation present from my dad. I had it highly customized over the years, but it was never the 100% reliable pistol that it had been when I'd gotten it, though it would chew the centers out of the target at 25 yds. First time out and shooting offhand at 25yds, it didn't do too bad. Need to move the rear sight over a bit. Ran right through a box of 230 gr. FMJs over 4 grains of Bullseye and a box of Federal, American Eagle 230s without a single issue.

The AR is one I put together on a Stag lower with a retro upper from a local guy. Still at 25 yds with my elbows on the bench. Really just seeing if it was going to work, this is only the second one I've put together. Three boxes of Federal Independence 62 gr FMJ Green Tip with only one issue. One round was dented fairly well and caused a jamb. Wasn't surprised there. Last up was my M1A. I'd bought one of the Bushnell AR/308 scopes for it last year when I was having issues with my vision. I have to say I was disappointed in the scope. I've had good luck with Bushnell in the past but this one is pretty useless past 50 yds. It's not clear and just not good. Took off the scope and cheek rest, took a shot at 100 yds. Hit the edge of the target. Five clicks left and we're on the paper, low and right. Ammunition was PPU 147 gr FMJs. I use these to get my rifles on paper, then switch to Lake City/ Federal M80s to get the sights where I want them.
Shooting off a rest with open sights, that light colored target just about disappears in the sun. I have to stock up on some 100 Rifle targets. Thought I still had some in my shooting box in the truck. Between the better ammo and a better target, that group will be half that size.


Anyway, beautiful day to be outside. Sun was out and temp was about 73. 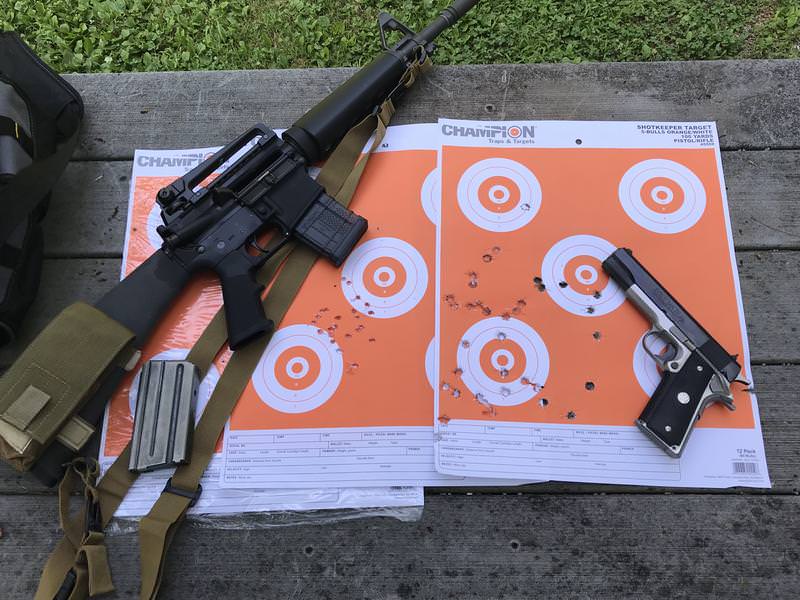 
" Tomorrow the sun will rise. Who knows what the tide could bring?"
Top

It sure looks like you enjoyed yerself - nice shhotin' ! ! .

Nothing wrong with that 100 yd group !
You spent your time well today Jason!
NUKE err I mean Boycott China- now and forever!!
Top

+1
It is not the critic who counts
Top

73? I thought it was hot as blazes up in your neck of the woods as well right now!

It's been all over the place this summer. We'll get a couple of perfect days in the mid 70s and then a week in the 90s. Today is supposed to be another nice one and by pure luck I have to take the ferry over to one of the Erie Islands.


" Tomorrow the sun will rise. Who knows what the tide could bring?"
Top

It has been a strange summer. Seems like FL weather here in SC!