Parts for an 1895 Winchester

Parts for an 1895 Winchester

I recently inherited a couple 1895's. One was a 30-40 Krag built in 1898. It has seen better days but still looks like it is in good mechanical shape. The other was a 30-06 saddle ring carbine built in the early 20's. The 30-06 appears to be in very good shape. Has a Lyman sight on it that looks like it probably came with the gun or soon after. Only thing is the 30-06 is missing the upper hand guard over the barrel. Is there any place that may have original parts or anyone out there that takes replacement stock parts and makes them look original? I know it is a long shot and would be expensive but would love to have the gun back in original condition.

Maybe Six will know someone that has parts. I could age one up but not sure how close I could come to matching the color with out the forestock. I know there used to be a place out of Tennessee that had replacement stocks for Winchesters. It's hard to match color of wood from photo's.
Top

Is Homestead Parts still around? They used to sell a lot of parts including forearms and handguards. They had a great eye that matched "Winchester Red" pretty well.
Top

Original Winchester parts are becoming like hens teeth to find....there's only one way to find them....you gotta hunt.....Internet or good gun shows and then be willing to part with big bucks.......some of the parts in demand like mainsprings, screws, extractors, etc are being reproduced.

Buckinghams in (I think) Tennessee used to have all kinds of stuff but I don't know if he is still around. In the last 10-15 years I'll buy a beat up gun for a couple of hundred just for parts but they have dried up also.

I have a fair amount of parts here for 92's, 94's and even complete parts for an 1886 minus the receiver and barrel and mag tube but I'm holding on to them.....besides, when you have a nice part people want it for next to nothing and want you to throw in shipping.

I always advise individuals who like the old Winchesters to buy Arthur Pickles books on the old guns. He describes the old levergun models to a "T" and has lots of references as to parts interchangeability as many of the models used the same wood, mainsprings etc, some with only minor modifications. I've said this before here on Leverguns and several people would PM me asking to look this or that up for them as their payments are due on their 70K pick up and they don't have the money to buy $50 worth of books.

I sound miserable don't I? Well, it's the truth.

Thanks for the information everyone I am new to the 1895 world . I agree that $50 in books is cheap. The gun looks fine without the top hand guard but I know it originally came with it and would love to have one back on if I could get close to matching the wood. I am sure if I keep my eyes open I will eventually find one. I did see an original hand guard and sight that sold on an auction site for $500. I know it will not be cheap but if I can get a good match I am not opposed to getting the gun back to original condition.

Three of the photos are of the 30-06 and two are of the Krag. I actually had a 30-03 that was in very good shape but my brother asked for one of the 1895's. He does not shoot much so I figured it would be a good gun for him to have.
You do not have the required permissions to view the files attached to this post.
Top

Very nice looking carbine. Always liked the 95 carbines and have wanted one in 30-40 Krag since I was a teen.
Top

Just for conversation sake I also have a 95 SRC in .30 army (30/40) . When I bought it the rear site was missing. I do have the hand-guard but it is cracked. A old friend of mine had a Buffington sight that we put on. Didn't have to drill. My problem is the handguard wont fit over the Buffington sight as the
opening in the handguard is too short to go over the sight. I do have it stashed.
https://i.postimg.cc/ZRB8cYZt/Win-95-424583.jpg
Top

Can't help with a hand guard but wish you the best in full swing it.
Top

The SRC looks cool, just as it is. If it were me I'd leave it that way, someone put a lot of time and effort to make a great little hunting carbine. The SRCs in the picture are both .30-06. The top one was the very first Winchester I bought when I was still in college. It was $300 because of the missing parts and butt pad. That little carbine and I have covered a lot of miles and taken a pile of deer, including my very first. For me, there's nothing better than toting that '95 up and down the hills of the places I like to hunt and hike.
The second one in the picture I picked up about a year ago. I got a good price as it was missing the rear sight and handguard. I'd bought a handguard about $80 at a show many years ago knowing I'd need one eventually. The rear sight took some scrounging and cost a pretty good buck, but now it's all back together and ready to go shooting. It can be done, but it will take time and $$.
Have some fun with those '95s! 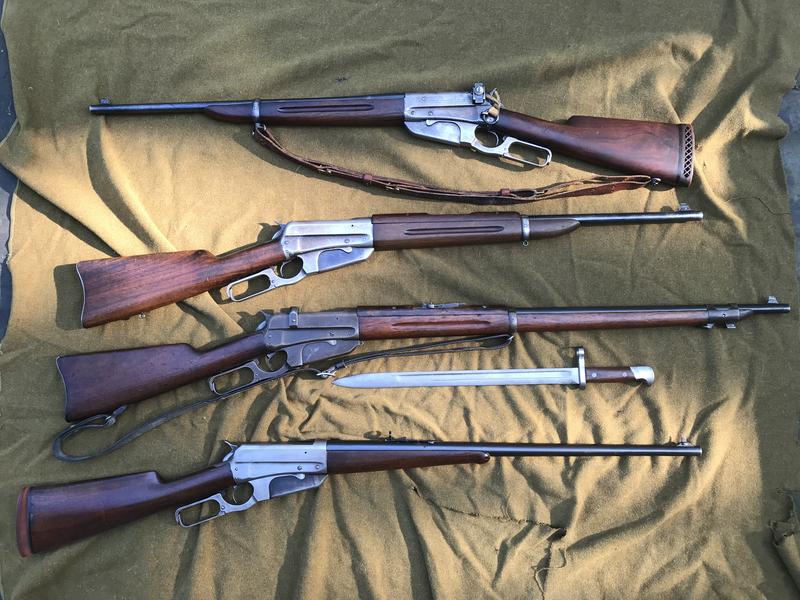 
" Tomorrow the sun will rise. Who knows what the tide could bring?"
Top
Post Reply
9 posts • Page 1 of 1