By heavy I mean greatly exceeding the power levels of the orginals, as long as it stays within the actions limits.
Top

IMO, it depends upon the brass/cases used.

If you use balloon head cases, I wouldn't advise heavy loads; but might be OK with solid head cases.

I would not exceed loading manual recommendations. If you think you need more energy switch to 44 mag or 444 Marlin
Jeepnik AKA "Old Eyes"
"Go low, go slow and preferrably in the dark"
"Freedom is never more that a generation from extinction" Ronald Reagan
"Every man should have at least one good rifle and know how to use it"
Top Lyman has loads up to 20000 cup with a 200 gr, jacketed with 2400 & other powders ( in strong actions only) for about 1600 fps
I have used the max load of 2400 in a newer Marlin 44-40 with no problems & very accurate, new starline brass is what I used
how much more pressure will the brass hold up too, I have no idea? I am sure its been loaded a lot hotter & I know the gun will take it

There is a fine line between hobby & obsession!
AND... I'm over it!!
No I ain't ready, but let's do it anyway!
Top

Why yes, yes you can! Lyman 49th list modern and vintage strong action rifles that can be loaded to 22,000cup!

Powder formula's may change over time but pressures are pressures!

Ah heck, here are the rifles, both Group I and Group II

I no longer use photobucket!!

OK - Savvy Jack has given excellent direction. I will add my own experiences just for some color.

Standard loads that produce the velocity that the .44-40 always did in factory ammunition (both blackpowder and smokeless) before SAAMI nuetered the .44-40 and theyinvented CAS shooting:
(All with Starline brass.)

These are bulk loads of smokeless that fill the case so they can support the bullet and crimp is only required to hold the bullet on - ie, bullets wont telescope in the magazine. These loads replicate the original bulk smokeless Dupont load. They are low pressure and also are safe in '73 & '66 rifles.
This really is all you need for everything a .44-40 might need to do, in any design of rifle, and they will kill deer both large and small.
However...

We are talking heavy loads - so -

(This is a starter load for the .44 MAgnum, so any modern Winchester 92 Rossi 92 or Marlin will handle this. It's is harder on .44-40 brass of course, but the worse than happens when the brass gets old is that small splits develop in the case mouth after a few loadings.)

these will give reasonable accuracy, which for me is three inches at 100 yards.


Now - I can't fail to mention my most accurate .44-40 load here, although it is not a ""heavy" load. It performs as well in three different rifles:

6 grains of H4227 as a smokeless priming under 32 grains of 3F blackpowder, and a 215 grain (dropping 220 grains for my alloy) bullet, with a mix of 20:1 lead/tin.
Using the 43-215C bullet from the mold sold by Accurate Molds and designed by John Kort after the 19th century factory Winchester bullet design, but with a larger lube groove. Lube is very soft 1:4 beeswax and lard.
Starline brass is unsized. Primer used was CCI large pistol
This soft bullet is seated after the powder has already been compressed with a jacketed bullet and then pulled out, and the cast bullet seated in its place, This is so the cast bullet is not deformed in seating.
Crimped only lightly.

This duplex with smokeless priming under blackpowder is an old target shooters type load from the early years of the 20th century. I have experimented with every variation of the charge weights for this load and different ideas - but found any variation from this recipe results in abysmal accuracy. So the load is very strict. 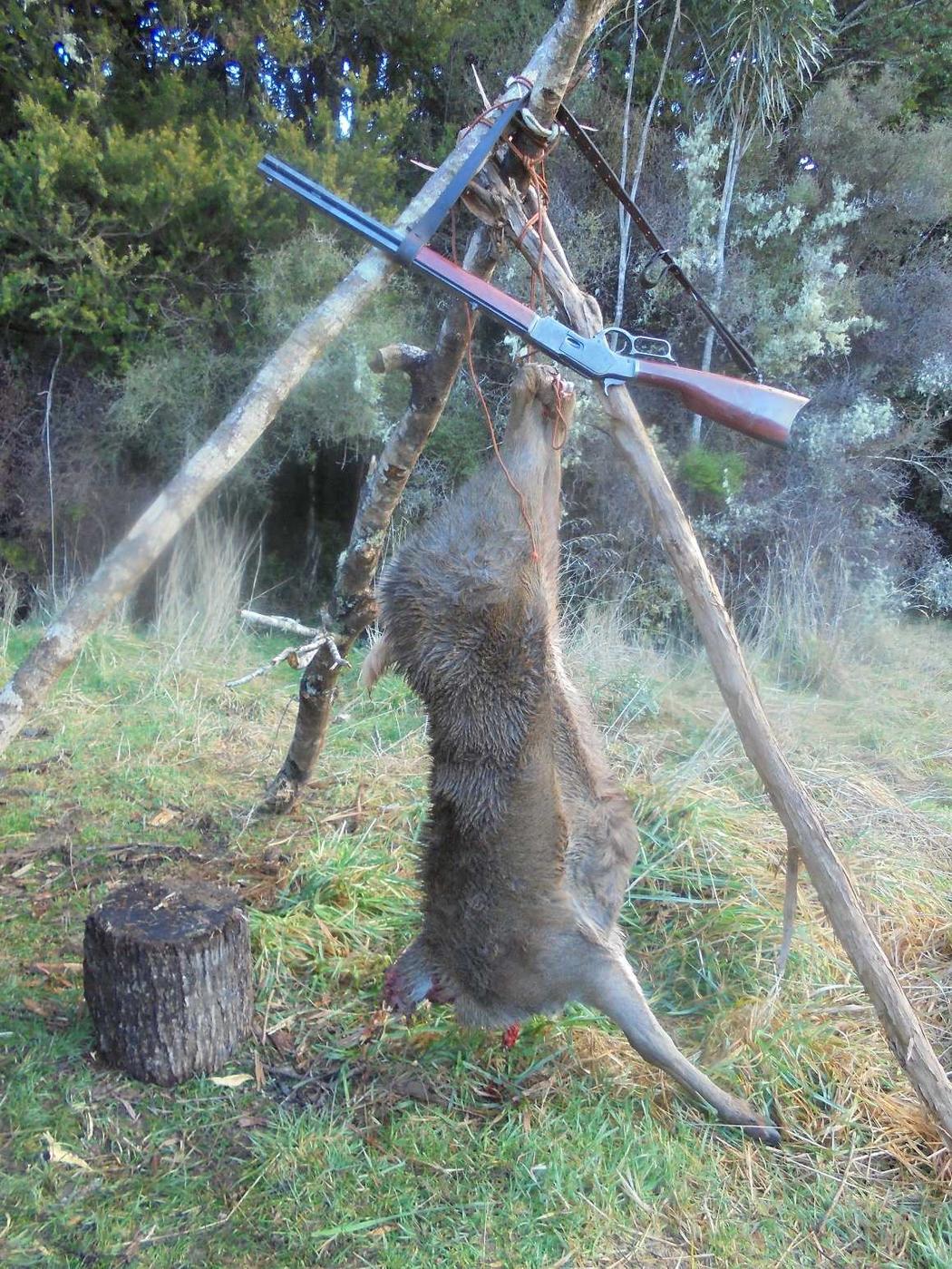 Last edited by Carlsen Highway on Wed May 15, 2019 5:24 am, edited 3 times in total.
A person who carries a cat home by the tail, will receive information that will always be useful to them.
Mark Twain
Top

Great information thanks fellas, always a pleasure to read when folks are enthused about the subject. I also liked the action strength groups. I knew 92, 1894 were strong and slide actions and toggle links were not. The rest I am glad you filled in for me.
Top

I never messed with duplex loads...

My testings of original early unheadstamped brass with Swiss FFG and Lyman's 427098 produced 14,285psi while the same load in modern starline brass with greater powder compression produced only 8,953psi.
https://sites.google.com/view/44winchester/

This might be of some interest in understanding pressures in the 44-40 early cartridges.
https://curtisshawk21.wixsite.com/44cen ... ss-powders
https://sites.google.com/view/44winchester/

That is an excellent website. I would like to contribute material to it some time.
A person who carries a cat home by the tail, will receive information that will always be useful to them.
Mark Twain
Top

I can do that.....
Just let me know...email or message me your content and I will add it to the blog pages. (now visible) I forgot to make them visible after some editing of the site.
Menu/other/old blog (or new blog)
https://curtisshawk21.wixsite.com/44centerfire/blog
https://sites.google.com/view/44winchester/

Excellent information bikerbeans!!! Thanks for sharing.

The highest I loaded for my MGM barrel was 21,000psi. Could be somewhere around 26,000cup but really no way to know for sure. Even Winchester said "no reloading" of their High Velocity loads. Personally I have had no problems after reloading some several thousand rounds of high pressure loads using Starline brass.

Technically (in my book) the 44 Magnum is a 240gr bullet cartridge....however, pressures are pressures and 200gr 44 magnum loads do create some high pressures.

One tricky area that some folks forget is that even the Marlin model 1889 has a chamber cut for a 44-40 bullet profile rather than the 44 special/magnums. The readily available extremely popular 44-40 Magma bullet by Oregon Trail "Laser Cast" and most all other manufactures is not a 44-40 profile bullet although the diameter can be sized small. Loading this bullet to 44-40 AOL lengths....the bullet can still touch the lands and create even higher pressures. Not to mention if the bore is smaller than .429.
https://sites.google.com/view/44winchester/